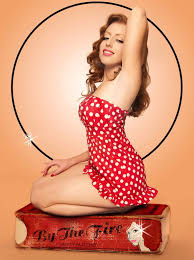 Bec Laughton – aka a petit redhead with a monstrous voice and a serious knack for penning a pop hook. A clear love of booty shaking old-school funk informs the music that flows from within this young songstress.

A finalist in the International Songwriting Competition, Unsigned Only (Nashville) and also the Independent Music Awards (New York), Bec represented little baby Brisbane amongst a list of international finalists. Also winner of a Queensland Music Award and finalist in four categories in the MusicOz Awards held at the Sydney Opera House there is no question of the Lady Laughton’s ability to pen a tune.

After playing shows in New York in January 2013 as a nominee for the Independent Music Awards Miss Laughton was asked to showcase in the biggest emerging artist festival in the USA, South By Southwest. Love for her unique indie/soul music is felt right across the globe as after a hugely successful trip to Europe/UK in 2011, Bec returned to Europe in 2012 to feature in the annual Music4Humanity Concert.

The budding songstress landed at #1 on the Triple J Roots Charts, CD of the Week in the Sydney Morning Herald and Indie Clip of the Week on Rage TV. She has played countless festivals including mainstage at Easterfest, Island Vibe, Woodford Folk Festival, Adelaide Fuse & Fringe Festivals, Spiegeltent for Brisbane Festival and Brisbane Powerhouse for the annual 2High Festival. She has supported international R&B act Zhane`, Leo Sayer, James Blundell, Grace Knight and the Queensland Symphony Orchestra.

The young songbird has roots in jazz being trained at the Queensland Conservatorium of Music. Growing up backstage in the theatre while her dad worked as musical director, rhythm and music are undoubtedly in the blood. Dabbling in musical theatre for over a decade the young singer/actor/dancer first appeared in lights in 1998 then landed her first lead role in a major production at 16 years. Playing Dorothy in the motown musical The Wiz she received rave reviews and the nickname “lion lungs”.